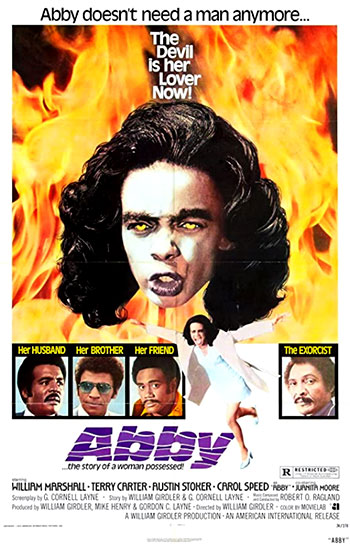 A possession film about a marriage counselor who becomes possessed by a Demon of Sexuality, when her father in law, an Exorcist, freed it while in Africa. He returns home, along with his son and a policeman to perform an African Exorcism on her.

This is pretty cheaply made but entertaining as hell. Speed is quite over-the-top at points but it all works. Hearing the deep base voice throwing obscenities is both hilarious and shocking. The rest of the cast handles it all well, keeping a serious face during the absurd proceedings. Director William Girdler wastes little time (the film runs 85 minutes) and delivers a few atmospheric bits, like when the entity is first released in a cave and when it enters the Williams’ house. Warner Bros. apparently successfully sued AIP and got this pulled from theaters. A shame really because, outside of a foul mouthed demon, there is very little similarity and I doubt WB owns the copyright on films about demonic possession.

Why was there a law-suit between Abby and The Exorcist? That is a frequently asked question. Abby is about a black girl(Carol Speed) who is possessed by a demon. So is Linda Blair in The Exorcist and it is up to a priest (William Marshall-Blacula) to help her. Just like Max von Sydow. According to an interview with Exorcist novelist/writer William Peter Blatty said- “Well I visited the set of Abby. To director William Girdler was just trying to make a different version of The Exorcist and I had no problem with that I actully liked Abby”. Well even though Warner Bros. sued American International for making a so called rip-off of their film, Blatty himself refussed to act against Abby because Abby and The Exorcist were both the same but in different versions. Blatty could’nt stop Warner Bros. to sue William Girdler but today he still disagrees.