And Soon the Darkness (1970) Robert Fuest 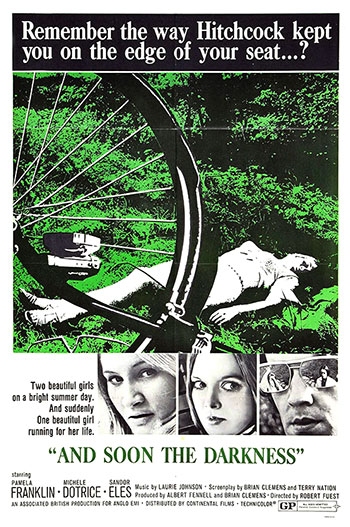 Two young British nurses bicycling through the desolate French countryside. A mysterious stranger on a lonely stretch of road. The women become separated and soon after, one of them disappears. Now the remaining girl, alone and frightened, begins an increasingly desperate search for answers among the strangely uncooperative locals. Where is her friend? Was there a murder? And as the darkness approaches, is the killer now stalking her? Pamela Franklin (The Legend of Hell House) and Michele Do trice (The Blood on Satan’s Claw) co-star in this unsettling shocker directed by Robert Fust (The Abominable Dr. Phoebes).

Every aspect of this film demonstrates film making talent of the very highest order. The script is superb, keeping you guessing right up to the end. The acting of the leads is faultless, but the icing on the cake is the amazing direction by Fuest. He manages to turn the open, sunny, French countryside into a nightmare landscape. Gradually cranking up the tension, alienation, and paranoia with the skill of a master. He really should have been a massively successful director. Pure craftsmanship, with a very creepy edge.