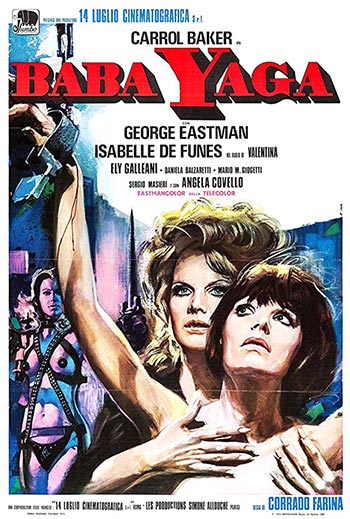 Legendary sex symbol Carroll Baker (BABY DOLL, THE WATCHER IN THE WOODS) stars as a mysterious sorceress with an undying hunger for sensual ecstasy and unspeakable torture. But when she casts a spell over a beautiful young fashion photographer (the gorgeous Isabelle De Funes), Milan’s most luscious models are sucked into a nightmare world of lesbian seduction and shocking sadism. Are these carnal crimes the result of one woman’s forbidden fantasies or is this the depraved curse of the devil witch known as BABA YAGA?

Apparently inspired by a comic book, “Baba Yaga” is an unusually compelling, surreal nightmare of movie that also is vibrant with the essence of the late 1960s. The story follows pretty young fashion photographer Valentina (Isabelle De Funes) who runs afoul of seductive sorceress Baba Yaga (Carroll Baker) who proceeds to meddle in her life via a tiny doll in an S&M getup. Baba is not one to take rejection lightly, and subjects Valentina to physical and psychological torments. Well-made, hard-to-pigeonhole film, director Corrado Farina succeeds in creating moody atmosphere and a warped logic in which anything can and will happen. Funes in particular does a superb job of convincing the audience of the vacuum that’s engulfing her; a young George Eastman (“Anthropophagous”) fares well in the role of her disbelieving commercial-director boyfriend. The direction, which intercuts comic-book imagery with hallucinogenic dream sequences (which all seem to possess a Nazi angle), is skillful and unpretentious.