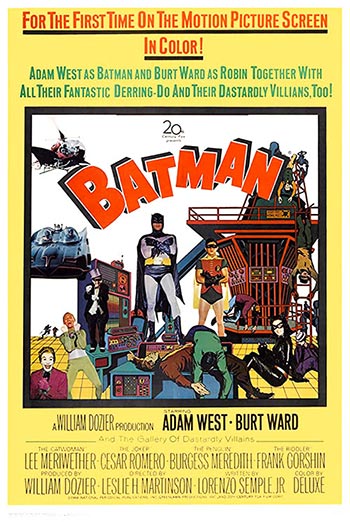 The archvillains of The United Underworld – The Catwoman, The Joker, The Riddler and The Penguin – combine forces to dispose of Batman and Robin as they launch their fantastic plot to control the entire world. From his submarine, Penguin and his cohorts hijack a yacht containing a superdehydrator, which can extract all moisture from humans and reduce them to particles of dust. The evildoers turn the 9 Security Council members in the United World Building into 9 vials of multicolored crystals! Batman and Robin track the villains in their Batboat and use Batcharge missles to force the sub to surface.

Holy camp site, Batman! After a fabulously successful season on TV, the campy comic book adventure hit the big screen, complete with painful puns, outrageous supervillains, and fights punctuated with word balloons sporting such onomatopoeic syllables as “Pow!,””Thud!,” and “Blammo!” Adam West’s wooden Batman is the cowled vigilante alter ego of straight-arrow millionaire Bruce Wayne and Bruce Ward’s Robin (a.k.a. Dick Grayson, Bruce’s young collegiate protégé) his overeager sidekick in hot pants. Together they battle an unholy alliance of Gotham City’s greatest criminals: the Joker (Cesar Romero, whooping up a storm), the Riddler (giggling Frank Gorshin), the Penguin (cackling Burgess Meredith), and the purr-fectly sexy Catwoman (Lee Meriwether slinking in a skin-tight black bodysuit). The criminals are, naturally, out to conquer the world, but with a little help from their unending supply of utility belt devices (bat shark repellent, anyone?), our dynamic duo thwarts their nefarious plans at every turn.