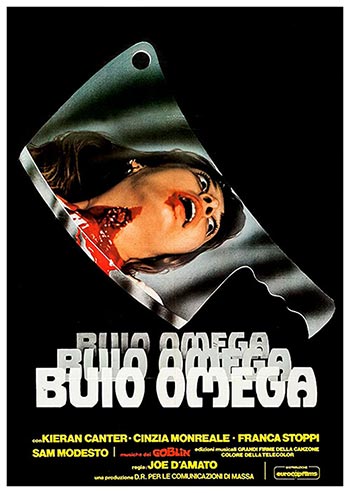 A young rich orphan loses his fiancée to voodoo doll mischief on the part of his housekeeper who is jealous of his attentions. He digs his girlfriend up, cleans her out, stuffs her, and puts her in bed at the mansion. Following this, he tries out and disposes of a series of young maidens, trying to find the right replacement for her, and the disapproving housekeeper helps him with the disposals.

Whatever your stance is on sleazy Italian horror films from the 70’s-80’s, it can’t be denied by anyone that this film is some kind of minor masterpiece. Here is a film that works on every level — not just the “gore” level that a lot of these films work on — and is actually quite tasteful in its depiction of corpse-loving.

First of all, the atmosphere in this film is amazing. Dialogue is left to a bare minimum, especially at the beginning of the film when there’s hardly a line spoken for a good half an hour… though the music of “The Goblins” (Goblin, right?) is actually quite out of place in this particular film, as Joe D’Amato’s directing style doesn’t really lend to their blend of.. uh.. progressive-disco or whatever it is (on the other hand, their music perfectly fits Dario Argento’s oversaturated colors in his films)… however, sometimes it hits the right notes at the right time. Everything has a sort-of washed-out look to it, which is nice. And almost the whole film takes place at night, which is nice, of course.

The film is actually a very simple story of not being able to let go of someone you loved, but it’s well-acted (shockingly!) and there’s enough gore and suspense to keep you watching.