Beyond the Valley of the Dolls (1970) Russ Meyer 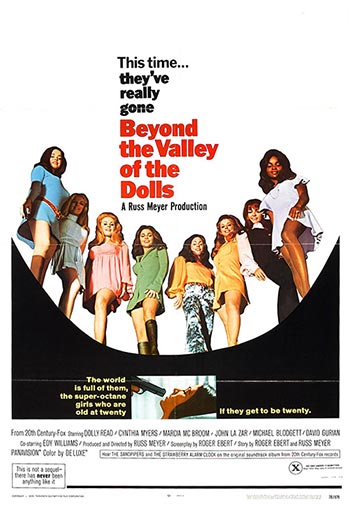 An all-girl rock band goes to Hollywood to make it big. There they find success, but luckily for us, they sink into a cesspool of decadence. This film has a sleeping woman performing on a gun which is in her mouth. It has women posing as men. It has lesbian sex scenes. It is also written by Roger Ebert, who had become friends with Russ Meyer after writing favorable reviews of several of his films.

Easily the best (and funniest) film about sex, drugs and rock and roll, ever made! Gorgeous women (Cynthia Myers is almost too incredible to believe), great tunes, time capsule worthy costumes, and break-neck editing, put this film in a class all its own. There has truly never been anything like it. Must be seen to be believed. Wonderfully appropriate score by Stu Phillips. For what it is, the film’s a masterwork. Recommended!