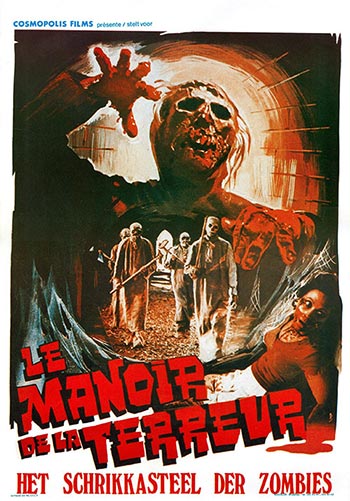 Professor Ayres discovers a secret in an ancient stone and when he opens a crypt, he revives zombies that kill him. He had invited three couples to visit him in his manor to reveal his discovery. However, they never get around to meeting the professor. Out of the blue, the zombies attack them and they seek shelter in the mansion. The creatures put the manor under siege while they protect themselves trying to survive to the horde of zombies.

“Burial Ground” is perhaps the sickest and sleaziest of Italian zombie gut munchers of the eighties! Andrea Bianchi’s film is filled with extreme gore, bad acting and lame music, but the most outrageous thing is the small boy character of one of the elders, as these two, mother (played by beautiful Mariangela Giordano) and son (Peter Bark) have a very unusual relationship together. The boy has a sexual lust for his mother and it results in one of the nastiest death scenes in the history of zombie movies. The gore is extreme with lots of gut munching-for example one victim has her head slowly pulled towards a broken window to have the shards of glass stick into their face. A must-see for fans of Italian cult cinema.