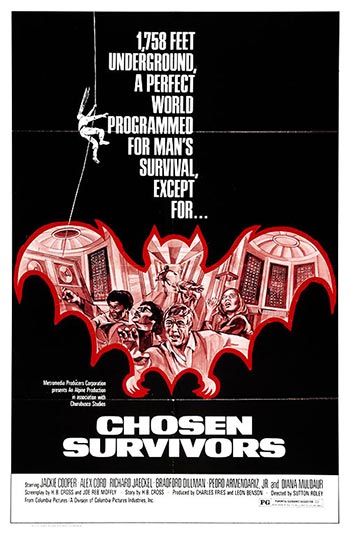 A group of diverse individuals are suddenly taken from their homes and flown via helicopter to a futuristic bomb shelter in the desert, nearly two miles below the surface of the Earth. There they learn that a nuclear holocaust is taking place and that they’ve been “chosen” by computer to survive in the shelter in order to continue the human race. The shelter is designed to allow the people to exist underground comfortably for years, but they are faced with a threat nobody could have predicted: a colony of thousands of bloodthirsty vampire bats finds a way into the shelter and launches a series of vicious attacks where they claim the humans one by one.

It’s far better than any plot synopsis suggests. True, it’s very 70s, both in characters (clothing/delivery of dialogue/hair), and the effects used, but it also captures the zeitgeist of paranoia running at the time. Fear of nuclear war and the government hangs heavy, while the group dynamic under a stress situation makes for a tellingly oppressive mood. The whole thing has a bleakness about it, and that’s before the vampire bats turn up hungry for what is apparently the only source of blood left available to them. The downbeat feel is further enforced by Karlin’s music score, which often sounds like the synthesiser strains favoured by John Carpenter for some of his well revered culters.

Competently acted by the cast, and effectively put together by Roley, Chosen Survivors is a neat horror/sci-fi hybrid. Not without some cheese and gaps in plotting for sure, but very effective and recommended on proviso you aren’t looking to be cheered up!