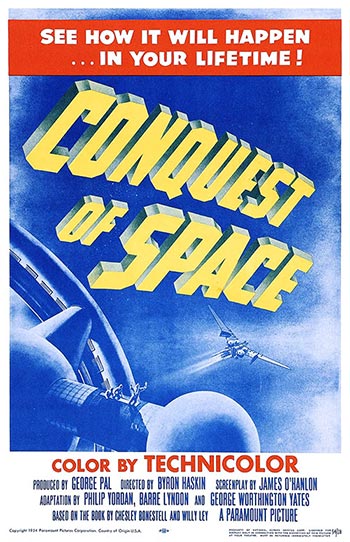 A team of American astronauts leave their space station on the first mission to Mars, but the captain’s religious beliefs may get in the way.

The Technicolor process was seldom put to better use than on this George Pal production of mankind’s first journey to Mars. The scenes on the space station (an elaborate wheel design) feature outstanding, beautiful star fields in radiant, cobalt blue. The ensuing trip to Mars contains the usual meteor episode, however it is carried off with a good degree of panache for a film of its time.

Sure, the “spiritual’ story line is delivered heavy handedly; but once again the visuals (many taken from famous Chesley Bonestell paintings) fill you with awe as the ship lands on Mars and the crew struggles for survival.

“Conquest Of Space” should be enjoyed for its imagination(given its production time frame), its top-of-the-line, saturated Technicolor vistas; and also the interesting, enjoyable film score.