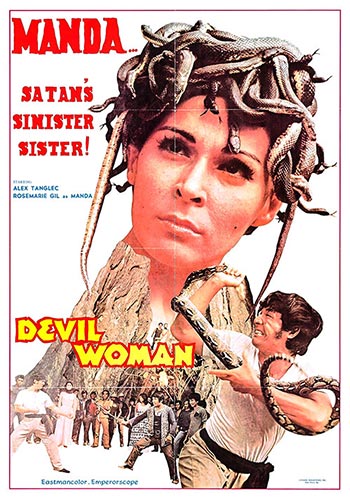 A woman is born with the power to control snakes. She uses these powers to seek revenge on the villagers who killed her parents along with the help of a local gang. In a side plot a Chinese Kong Fu master and doctor gets mixed up line of terror and death.

If you are familiar with Philippine or Asian horror films, then you may want to get your claws on this movie, as it’s a great one. It showcases the acting talents of about 1000 snakes of all shapes and sizes.

Mix in a Chinese kung-fu master, a woman with snakes for hair like Medusa, and an angry village mob, and you get a very strange and wonderful film. Poor Manda it seems was born with a unique hair-do and the power to communicate and control those foul serpents. Needless to say, she ain’t exactly miss popular and is tormented by the other kids. She does have one male friend that plays with and helps her out when being harassed by the other children.

Manda’s hair ends up causing her great tragedy though when a kid trying to pull off her ever-present scarf that covers that snake nest is bitten and dies. Enter the village mob, which burn Manda’s home and parents to the ground. From here on out Manda and her snake head ass are out for blood. She returns as a grown woman to terrorize those who killed her family with an arsenal of snakes.

There are some silly romantic sidelines thrown in and a traveling kung-fu man shows up to get in the way, but for the most part, it’s fun to see Manda take out the assholes from her troubled childhood. I found it funny that she was hanging out in a cave with a bunch of thugs she hires to rape and pillage the village, but a girl has to have a few friends around I suppose. Looking for a snake movie? Like Asian films and horror? Well, here ya go!