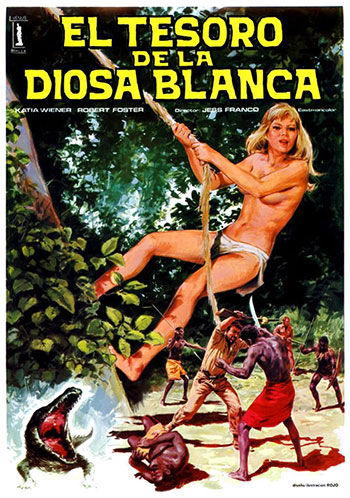 A group of adventurers head to a primitive tribe in Africa to find a treasure of diamonds and a beautiful white girl who was lost years ago and was made the tribe’s goddess.

Director Jess Franco takes the Tarzan concept and twists it into an amazing world of sex and cannibals. The plot involves a group heading into the jungle to find a dying womans daughter who has become the leader of a savage tribe of cannibals. The group intends to get the daughters inheritence , by leaving her in the jungle ( but the groups macho, do well guide doesnt want any part in this scheme.

The whole film has a very bizzare atmosphere due to its strange cast and very psychodelic soundtrack. seriously, the music in this film was great, very strange synthesizer that gives the film a 70’s feel. The dubbing is great this adds to the films cheesy appeal. if you like so bad its good cinema with tons of trashy nudity, funky music and great dubbing then give diamonds of kilimandjaro a chance.