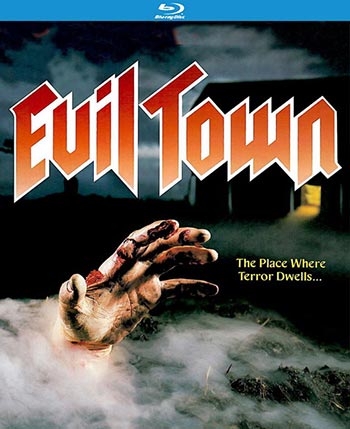 A group of four friends traveling the West Coast arrive in a small town with a strange history of its residents disappearing mysteriously. What’s more is that the town’s illusive doctor, Dr. Schaeffer (Dean Jagger), is rumored to be conducting sinister experiments on the town’s youth so as to combat the aging process. As the group of young travelers find themselves embroiled in a diabolical scheme of medical madness, they realize – perhaps too late – that they are Dr. Schaeffer’s ideal specimens.

A troubled production from its mid-70s beginnings, EVIL TOWN started life as ‘Dr Shagetz’ and was helmed by various directors at different points, including a young Curtis Hanson (L.A. Confidential). In the early 80s, producer Mardi Rustam bought the film and further retooled it, adding additional moments of sleaze and a strange subplot brewed from his own film, EVILS OF THE NIGHT, eventually retitling it EVIL TOWN. This bizarro mutant film epitomizes the lengths producers would go to re-market their work for the video era.