Evils of the Night (1985) Mohammed Rustam 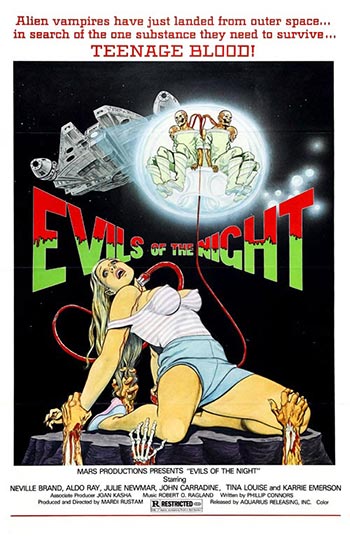 Sex-hungry teens are kidnapped by auto mechanics, who take them to a rural hospital run by aliens who need their blood as the key to their own longevity.

Kozmar (the ubiquitous John Carradine looking very worn and wizened), Zarma (leggy eyeful Julie Newmar; Catwoman on “Batman”) and Cora (a haggard Tina Louise; Ginger on “Gilligan’s Island”) are a trio of evil aliens who need the blood of young folks so they can make a youth serum and prolong their lives. The wicked extraterrestrials hire bumbling drunken lout mechanics Fred (an outrageously hammy Aldo Ray) and Kurt (an equally histrionic Neville Brand in his ignominious final film role) to abduct idiotic libidinous teenagers for their nefarious experiments.