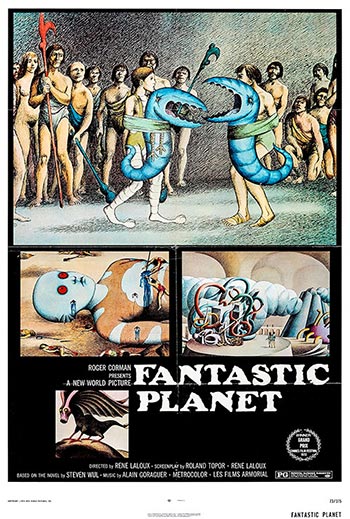 Slaves and masters dominate the narrative of the faraway world of Ygam. Set around the lifespan of Ter, a minute human shaped Om slave, and pet, of the giant blue alien Draags. Escaping into the wilderness and with a device used for intellectual advancement of the Draags, Ter finds refuge and support from fellow Om’s and using the learning tool, he finds that knowledge is power and then sets to use the new found knowledge to revolt against the Draag masters…

“Fantastic Planet” was apparently double-billed frequently with “Yellow Submarine” back in the 70s, and its not hard to see why. Both are the finest heap trips animation could offer. Both are subversive fun coming under the guise of a children’s film but really intended towards the older counterculture and intellectuals. However, both films have many unique qualities. “Fantastic Planet” is one of the most mind-blowing animated films I’ve seen in my life and pretty close to being a masterpiece.

The film looks beautiful and surreal at the same time. Like the films of Jodorowsky, it never comes across as being too pretentious because it manages to make you go along with its otherworldly inner logic. The plot is linear and easy to follow, but the world is so completely alien its bound to alienate some viewers. However, those who ask for more from cinema than just entertainment will love this. No wonder its a huge cult favorite over in France (with a none too shabby following in the states, many of whom saw it on USA’s “Night Flight” TV series). The animation itself is rather primitive, but the imagination on display makes it work incredibly well. Every single image in this film is memorable. “Fantastic Planet” is a film that can’t be done justice by a simple explanation. Its such a rich film it demands multiple viewings.