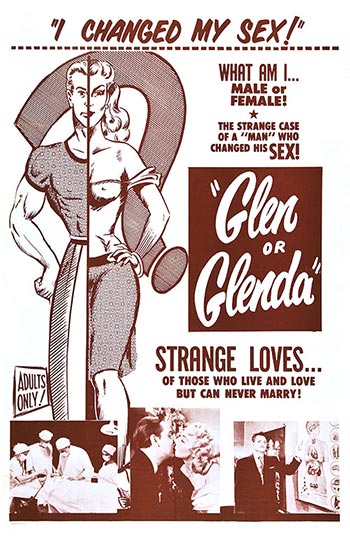 “Glen or Glenda” tells two stories. One is about Glen, who secretly dresses as a woman but is afraid to tell his fiancée Barbara. The other is about Alan, a pseudohermaphrodite who undergoes a painful operation to become a woman. Both stories are told by Dr. Alton, who also delivers an earnest lecture on tolerance and understanding. A second narrator, The Scientist, delivers commentary which contains more philosophical pronouncements than facts. The film also has flashbacks-within-flashbacks and a strange dream sequence; Inspector Warren’s investigation of a transvestite’s suicide leads him to learn more about men in women’s clothes; Johnny’s wife leaves him when she discovers what he wears while she’s away; Barbara is oblivious to her fiancé Glen’s desire to wear her angora sweater; Satan invades Glen’s nightmare; and The Scientist only offers cryptic advice like “Beware of the big green dragon that sits on your doorstep.”