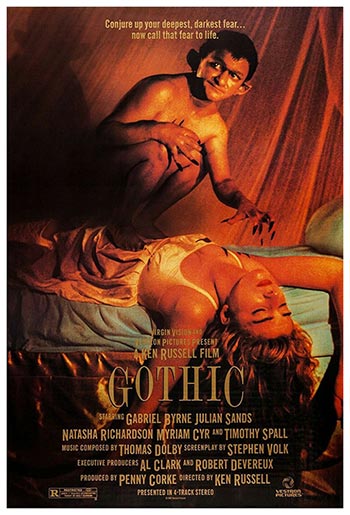 Story of the night that Mary Shelley gave birth to the horror classic “Frankenstein.” Disturbed drug induced games are played and ghost stories are told one rainy night at the mad Lord Byron’s country estate. Personal horrors are revealed and the madness of the evening runs from sexual fantasy to fiercest nightmare. Mary finds herself drawn into the sick world of her lover Shelley and cousin Claire as Byron leads them all down the dark paths of their souls.

GOTHIC is a seductive and fascinating study of the four principle players in the turn-of-the-century origin of at least one, if not two, of the principle monster icons of popular culture: the vampire and the Frankenstein Monster. But despite the incredible (and true) historical significance of the writing challenge, to produce a ghost story apiece worthy of these literary personages, Mary and Percy Shelley, Lord Byron and Polidori, the film is brilliant in its fictional depiction of people whose minds are brilliant enough, creatively, that their ideas become tangible forces, released, and uncontrollable.

The chaotic structure of GOTHIC is excellent, while the interplay between the actors is fabulous. GOTHIC’s intellectual hysteria creates an atmosphere where ghosts and demons gain power and autonomous life from their creators, showing the formulation in Mary Shelley’s mind of the Frankenstein story, and the tragic consequence of both the story and the real lives of Percy Shelley, Byron and Polidori. Well worth experiencing.