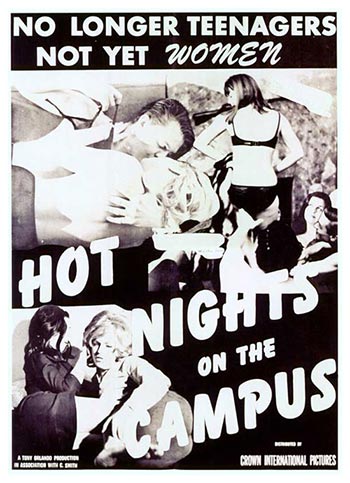 Small town bumpkin Sally (genre stalwart Gigi Darlene) gets a family friend to arrange for her admission to a big time New York college. She thanks him by sleeping with him. Feeling strange and left out, she asks her roommates for some advice. In between all the nudie negligee modeling and faux lesbian frolicking, they suggest she go to a “typical” campus party. There’s she meets a young “athletics” major and they immediately hit it off. Sally shows her approval by sleeping with him. Soon she is torn between two lovers. Then, she’s preggers. Finding it impossible to deal with the impending baby, she goes to the grimiest backroom abortionist in all of pre-Roe vs. Wade USA. Of course, she can’t go through with it. Instead, she finds another sucker… I mean, university student – to make her an honest woman…whatever that is.

Tie a hot chick around a hot oak bed! Tony Orlando, not the famous singer we all love, but the late director who made this classic sexy escapade with hot chick from the 60’s like Gigi Darlene, who’ll make you knock three times, and hey, has anybody seen my sweet Judy Adler, and the mega-goddess, one and only, Alpha Centuri will wonder who’s been kissing her on that hot summer campus patch.