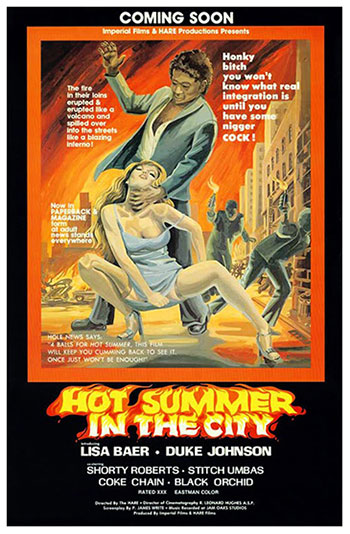 A gang of Black Militants, planning to erupt a volcano of racial riots throughout the suburbs, decide to kidnap and ravish an innocent young white girl, whom they find lost along the highway one night.

Hot Summer In The City is one HELL of a film. It drips with such perversity and filth, taking a shower after viewing becomes mandatory. The atmosphere is shockingly filthy and wreaks of disgust. It’s graphic racial undertones sprayed throughout and fair share of Exploitation violence sprinkled near the end, make for essential GRINDHOUSE viewing.

The film is Roughie, no doubt, filled with HC inserts throughout and penetration continuously. But, such scenes are stitched so well within the Exploitation atmosphere, it becomes part of the film seemlessly and doesn’t stick out like a sore thumb. It actually becomes part of the plot. Hot Summer In The City also contains its fair share of disturbing content. With a mentally handicapped actor participating in the depraved acts, one wonders whether the actor is truly acting or actually disabled.

With The Beach Boys, The Supremes, and The Doors all blasting through the soundtrack, one slowly begins to understand why such a film will never see the light of an official SE release.