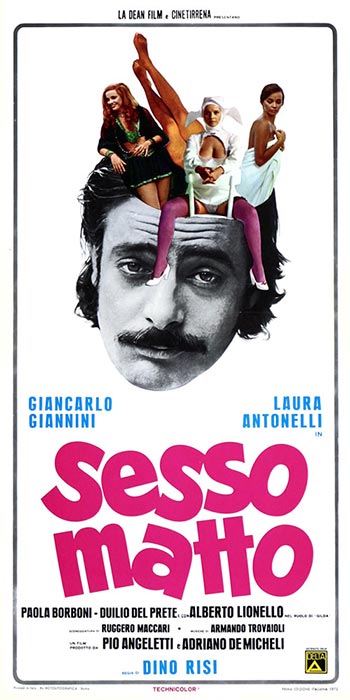 How Funny Can Sex Be? is an eight-episode anthology film about love, sex and marriage in contemporary, mid-’70s Italy.

One of the innumerable portmanteau films produced in Italy since the 1950’s many had been helmed by multiple directors and featured the most popular film stars of the time. Some other examples, however, were made by one director as a vehicle for a particular star’s versatility (for instance, Nino Manfredi in Lina Wertmuller’s LET’S TALK ABOUT MEN [1965]). This one, in fact, follows the latter trend and featured Giancarlo Giannini and Laura Antonelli in all (but one, in her case) nine segments. However, with the 70s, a lot of vulgarity had seeped into Italian comedy and, with a title like that, the film certainly falls into this category – despite the respectable fare with which both Risi and Giannini were typically associated!

How Funny Can Sex Be?