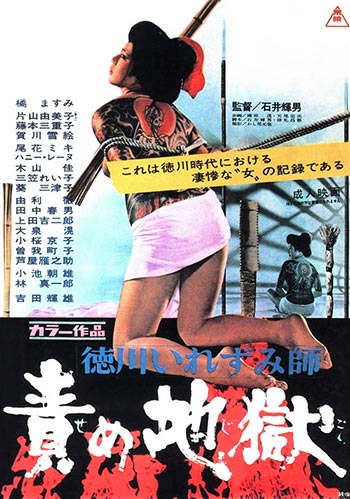 Japan nineteenth century. High demand for tattooed geisha generates an entire industry for their “production”. Europeans pay more for tattooed beauties. Against this background, and considering the gorgeous tattooed women develop the history of confrontation between two highly skilled masters of tattoo.

When a movie opens with a scene of a crucified woman being speared through the heart, sending a geyser of blood shooting into the spearman’s face, and that’s followed by a scene of a screaming woman buried up to her neck in the dirt getting her head cut off by two guys with a crosscut saw, it’s a pretty safe bet that the movie is by Tokyo’s Emperor of Extremism, Teruo Ishii. This time out the Master of Mayhem gives us a hellish whorehouse of tattooed tarts (complete with cool black light body art) and an absolutely amazing ending where a woman is tied upside down between two bent saplings and the ropes are cut simultaneously causing her to be split in half down the middle while flying up into the air!