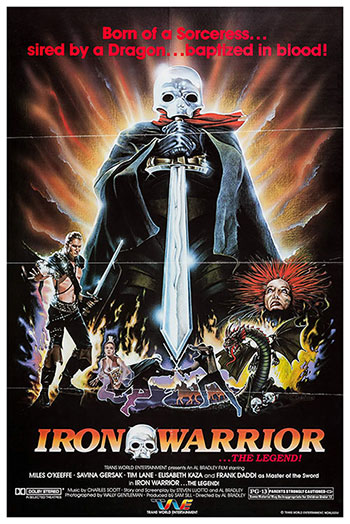 The Fighting Eagle returns again, sans Thong, to the legendary realm of Dragor to do battle with Phaedra, an evil sorceress. Her main weapon is an unstoppable warrior, known as the Master of the Sword, who continuously battles Ator to a draw, until finally revealing his secret connection to the Blademaster.

“Iron Warrior” introduces a new style both for Ator (he has black hair now, in a ponytail, and barely utters more than fifty words in the entire movie) and for the series itself. Director Brescia drops the silliness and campiness of the two D’Amato-directed “Ator” flicks in favor of a pseudo-arty approach. He employs every trick in the book: slow-motion, fast-motion(!), wide-angle lenses, cheap editing tricks to make people “disappear”, etc.