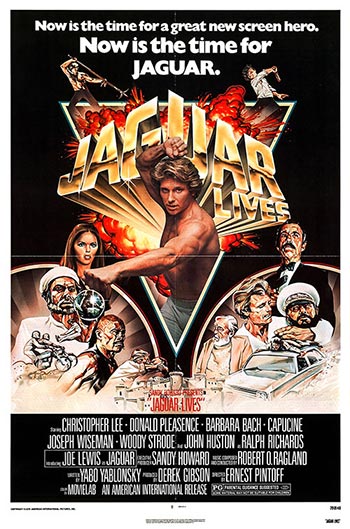 A world’s new kung-fu hero (Joe Lewis) is out to stop drug dealers, gangs and help save the world from an evil con (Christopher Lee).

You got Christopher Lee, Donald Pleasence, Joseph Wiseman and Barbara Bach making up the cast with some nifty performances. Ironically, they themselves have starred in a Bond film. It’s just too bad that they have very little to do here with their meagre roles. Other notables making up the well-known cast include Woody Strode, Capucine, John Huston, Anthony De Longis and an enticing Sally Faulkner in some sexy lingerie.

“Jaguar Lives” at times is an exciting escapism story that’s filled with some cartoon like characters and a sizzling verve of precise and intense action scenes. The rollicking martial art scenes seem to feed off the story rather then being just senseless mayhem. Well, that might be a plus, but sometimes there was just too much talk where there could have been some vigorous activity. But when the action did kick in, the tempo was staged with supreme skill and impressive set pieces – just like the fitting climax battle.