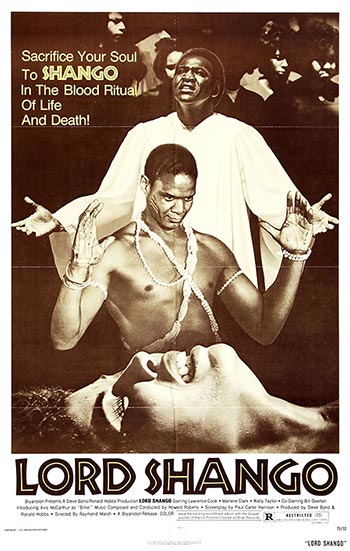 A tribal priest returns from the dead to take his revenge on non-believers.

“This film was filmed on location at the famous “:Oyotunji village near Sheldon,SC.Oyotunji is an African village in which the practioners practice a combination of the IFA, SANTERIA, and VODOUN religion. Lord Shango is a movie that utilizes names from the traditional Yoruba religion called, “Ifa”.

LORD SHANGO has characters such as ,”Femi”,”Banjoko”,and ,”Shango”. Shango is the Deity of fire and lightening and male virility. Femi is a nickname which means beneficial to me. Last, “Banjoko” which is a name of an African deity in the movie, is a traditional name that you give a child that has a history of dying and then returning in a subsequent birth. Banjoko menans, “stay with me (implying that maybe this time that child WILL NOT be “Abiku” (a child who dies prematurely-before ones parents). Although the movie is a little cheesy’; nevertheless, I like the storyline. As a high priest (Babalawo) of the Ifa religion-I’m glad that I’ve encountered a movie with traditional African religious themes that doesn’t “Voodoolized or Demonize” African Traditonal Religion.”