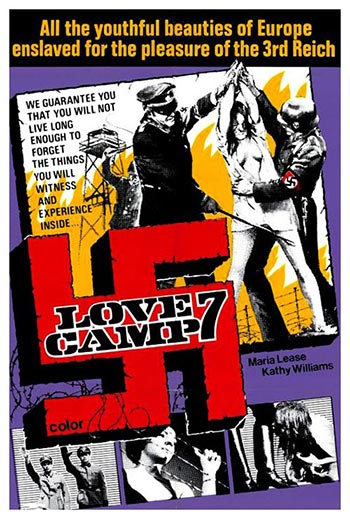 Set in a Nazi “Love Camp” that services the needs of front line officers. The video packaging claims that this film is based on fact, but the plot is so far fetched you would have a hard time believing that. Two young WAC officers go undercover as POW’s in the prison camp hoping to get some information from a scientist that’s being held there, before being sprung out by the French resistance. Unfortunately things go wrong with the break out and they end up overstaying their welcome and being subjected to the same indignities as the other inmates.

For those who prefer movies that degrade women and have an overflow of rape, nudity and violence, then this movie is for you! Maria Lease plays one of 2 women who are taken captive by the Nazis. She is one of the many women that are used to “amuse” the high commanders of the Nazi Military. The buxom Lease is stripped, hung, slapped and all other forms of sexual mayhem that come with being a pretty captive of the Nazis. An enjoyable film.