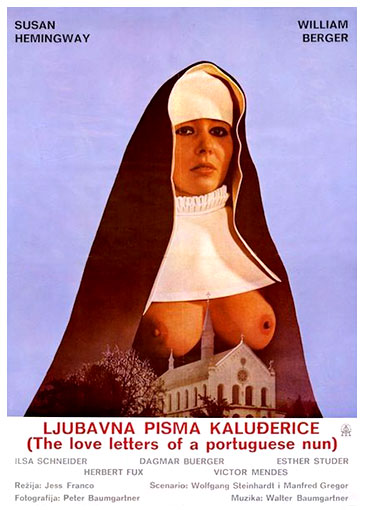 16-year-old Maria is forced into Serra D’Aires convent, secretly run by Satanists. Her confessor is in collusion with the Mother Superior. Maria is tortured, forced into sex with men, women, and the horned Devil, and told that it’s all a bad dream. She writes a letter to God, and a Knight rescues her, only to fall into the hands of the Inquisition, put on the rack, and condemned to death like Joan of Arc.

Ken Russell’s classic “The Devils” (1971) almost gave birth to a new genre of the exploits of sex starved and repressed nuns. “Love Letters Of A Portuguese Nun” is together with “Flavia The Heretic” one of best and it’s also one Franco’s most exciting. A teenager is caught kissing with her boyfriend by an evil priest who talks her mother into sending her sinful daughter to a convent. From the first day and all through the movie the poor teen is put through one sexual humiliation after another (incl. sex with satan who has one horn in the forehead!?!). It’s sleazy as hell but also very done, beautifully shot, good locations and wellacted. “Love Letters..” could also be seen a comment on religion (Franco with a message?!?!). A must for fans of stylish European 70’s smut!