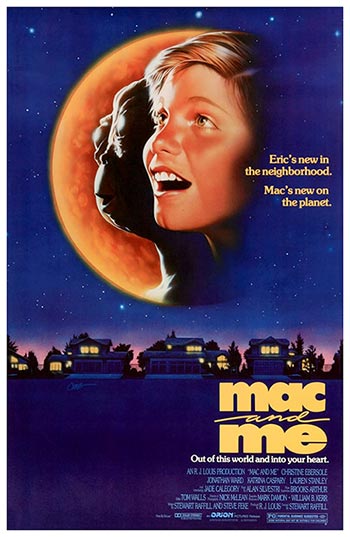 A Mysterious Alien Creature (MAC) trying to escape from NASA is befriended by a wheelchair-bound boy.

You must see this movie immediately. It is so epically bad, that it’s amazing. Every scene is just complete madness, it makes you think everyone involved in the movie must have been on hard drugs. The cliff scene, the McDonald’s scene, and the 5 minute scene where Eric is jogging (well…) with his mom while a power ballad plays in the background. EVERY scene is a winner. After each scene, you can’t wait to see what madness awaits in the next scene. You can’t stop. You’ll want to watch it again. You’ll want a sequel after the “We’ll be back” is shown at the end, but you will never get one. The alien puppets as well as the studio this was shot in were likely burned shortly after filming completed (which was probably about a week after it began).

Best viewed while extremely tired or under the influence of something.