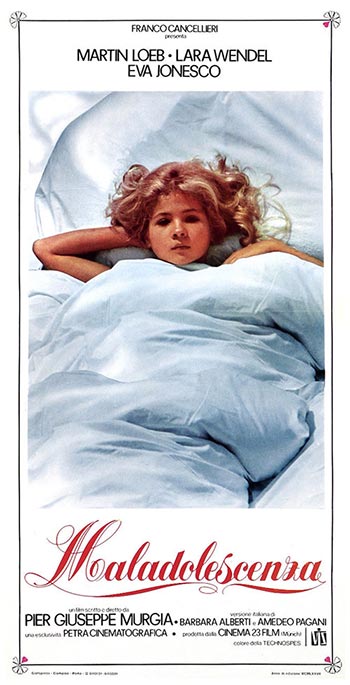 A teen boy grows from playing and fighting with his German-shepherd dog, to playing kids and adult games with two equally young girls, in a dream-like forest which eventually turns eerie, and somber.

A young boy named Fabrizio and girl Laura must psychically explore their budding sexuality. Things get complicated when arrogant Silvia enters the picture & our young hero is drawn to her and Laura now feels ignored. They begin playing cruel games and tormenting her. For instance, during a game of hide and seek Laura finds them lying naked beneath a tree and she is forced to view their love scene.

“Spielen wir Liebe” aka “Maladolescenza” has to be one of the most controversial films ever made. When it came out it was banned or heavily cut in many countries as child pornography. The film contains plenty of surprisingly graphic nudity provided by Martin Loeb, Eva Ionesco and Lara Wendel. Both girls were twelve years old at the time of making the movie. At least the sex scenes are quite tasteful and thankfully simulated. The film was actually banned in Germany on 28th of July 2006 due to its content, so the DVD will be no longer available for public consumption.