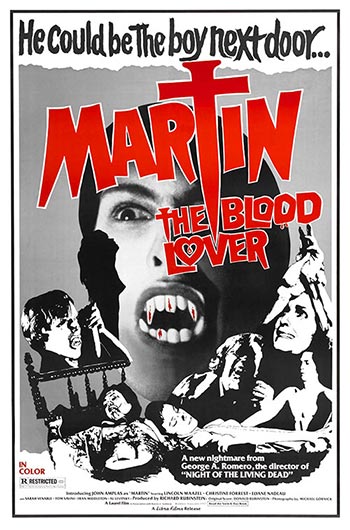 George Romero does for vampires what he has already done to zombies – an intense and realistic treatment that follows the exploits of Martin, who claims to be 84 years old, and who certainly drinks human blood. The boy arrives in Pittsburg to stay with his uncle, who promises to save Martin’s soul and destroy him once he is finished, but Martin’s loneliness finds other means of release.

George A. Romero will always be associated with his innovative and spectacular zombie trilogy (‘Night Of The Living Dead’, ‘Dawn Of The Dead’ and ‘Day Of The Dead’, all classics). Dig deeper and you will find he has made several less discussed but worthy movies, including this one, quite possibly the best movie he has ever made.

‘Martin’ manages to be both a disturbing psychological drama and a genuine horror movie at the same time. It is complex and mult-layered enough to be read in more than one way. It’s up to you, the viewer, to decide whether Martin (John Amplas, in an impressive debut) really is the vampire he claims to be or is simply deluded. It’s a pity that this movie slips through the cracks. Hard core horror nuts often undervalue it because it isn’t what they expect from the genre, and movie buffs who can appreciate downbeat 70s classics like Scorsese’s ‘Taxi Driver’, and Toback’s ‘Fingers’, will dismiss it as “just another horror movie”, not realizing just how much it has in common with the aforementioned. Too bad. ‘Martin’ is a real gem, and highly recommended.