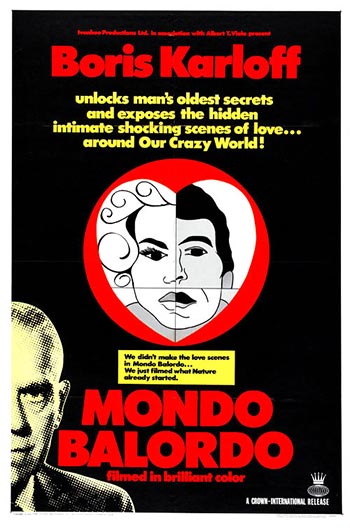 Documentary showing perverse and aberrant behavior from around the globe, including such things as sex slavery, dwarf love, Asian brothels and lesbians.

We travel with Boris to all sorts of hidden corners of our weird, kooky world. First we see an Italian rock group in full swing. Their lead singer is Franz Drago, a frantic, almost acrobatic 27-inch tall volcano of energy. Then it’s off to Las Vegas, to see Beauty Pageant footage lensed by a boob-obsessed cinematographer. Next stop, a photo session of Asian girls in bondage. “This is for magazines for readers of special tastes…” Karloff purrs. Some of the footage, featuring natives tearing apart hunted animals may turn off some viewers. (Hey, the Mondo films were meant to shock.) An actual African exorcism where a live chicken is consumed, instructions on how to behave at a drunken transvestite party, and a poverty stricken Italian town where citizens visit the cemetery to ask the dead to cast spells on enemies and choose winning lotto numbers, fill the bill. After watching this film, you will think the world is filled only with chicken-eating, gambling drag queens! One scene in BALORDO shows a European freak show where Mr. Karloff tells us “Sometimes the people buying the tickets are the freaks.” Tell it like it is Boris!