Night of the Comet (1984) Thom Eberhardt 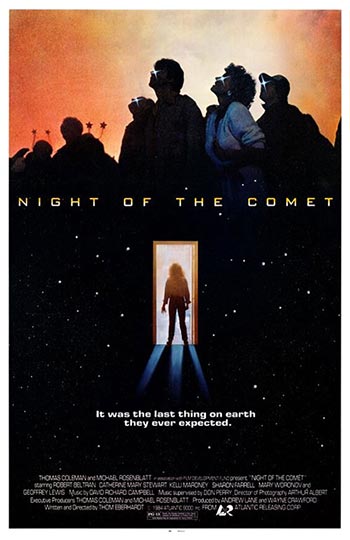 Two pretty high school girls (one a cheerleader!) don’t like their mother or her new boyfriend (“Daddy would have gotten us Uzis!”). One morning, they wake up to find that everybody in Los Angeles has been turned to dust by a Comet except them, a guy who looks like Erik Estrada, some zombies and the occupants of a secret underground government installation.

Trapped in a hellish copyright limbo for over a decade, Thom Eberhardt’s “Night Of The Comet” is a film whose reputation is due for a serious rehabilitation. Generally–and wrongly–categorized with typical 80s teen horror films, “Comet” is in fact a smart, skillful parody of the low-budget sci-fi horror classics of the 50s, 60s and 70s–and a wry commentary on teen culture in the 1980s as well. For those familiar with the original films, the parody “clues” are all over the place–not least of which is that the early part of the film takes place in the back of LA’s classically offbeat El Rey movie theatre, which is showing low-budget B horror movies. Most of the “scary” scenes are preceded (subtly or otherwise) by the famous “red light” warning used commonly in the 60s and 70s. And the apocalyptic plot, settings and dialog, especially among the scientists, are straight out of the 50s.