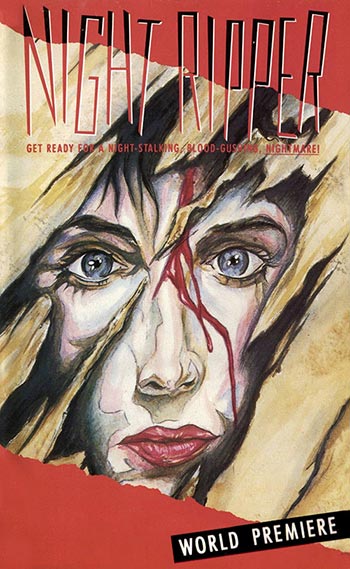 What do you get when you combine a crazed serial killer, the Soup Nazi from Seinfeld, and a creepy lesbian? You get Night Ripper of course! Night Ripper is a hilariously bad SOV slasher film from 1986. This one definitely falls under the category of ‘so bad it’s watchable’. The acting is awful, the music is pure 80’s, the whole thing is a big cheesy mess.

The plot? “Models” are being murdered by a psychopath in town. Not really sure if all of the girls were models though. Most of the victims are people we don’t see for more than two-three minutes. Every time a young girl pops up on the screen, they are killed off right away so there is no time to even tell if they are models. Anyways, the main suspect is Mitch, a photographer. He has got to be the soup nazi from Seinfeld, just saying. So we see him being all creepy, and then this other woman enters the movie. She is a lesbian and seems to hate models therefore she is another suspect. The whole thing ends in a Mannequin factory where the killer is revealed while trying to kill our main heroine Jill.

Night Ripper is the ultimate cheesy 80’s slasher. The acting is awful, the music is terrible, yet it is very watchable (at least once). The death scenes are a little gory, but not overdone. Check it out if you can.