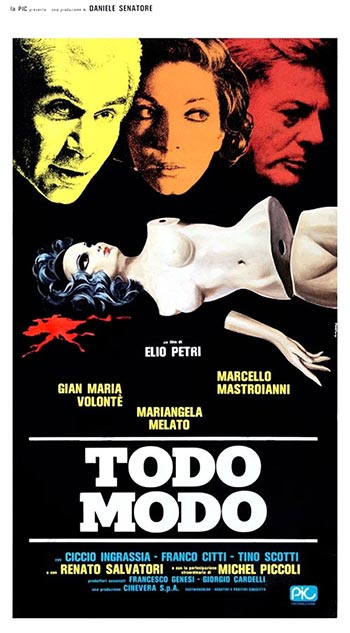 1970’s Italy. While an unnamed epidemic is killing the nation’s citizens, Italian politicians enter a secret underground religious retreat, under the guidance of maverick priest Don Gaetano. Amongst vicious infighting, one by one, the politicians begin dying.

The film is notorious because Gian Maria Volonte’s character, called simply ‘M’, was clearly a lacerating portrait of Christian Democrat politician Aldo Moro. Two years after the film was made Moro was kidnapped and assisinated, probably by the Red Brigade. Marcello Mastroianni is similarly brilliant, completely different from his roles in Italian comedies.

The supporting cast members, who work in marvellous co-ordination with one another other, are all excellent. Set Design and cinematography are also amazing. The best underground bunker since Dr Strangelove.

Todo Modo is loosely based on the novel of the same name by Leonardo Sciascia. The English translation of the title is One Way Or Another.

Trivia: Director Elio Petri commisioned a jazz score from Charles Mingus. However, it was not used. Ennio Morricone (never one to leave the telephone unanswered) was on hand to create a highly unsual expressionistic soundscape as a substitute.