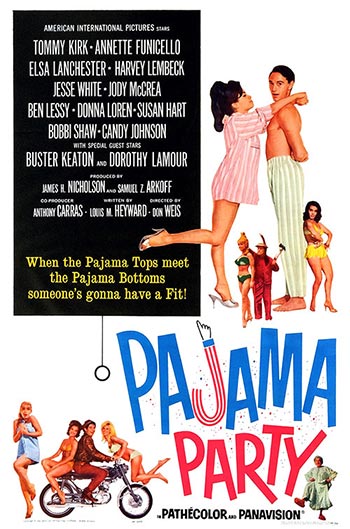 Gogo, a Martian teenager, is sent to Earth to prepare the way for an invasion. The first Earthling he meets, one Aunt Wendy, is a rich widow who runs a dress shop catering to teenagers. Her nephew, Big Lunk, is a volleyball-loving guy with little interest in romance, which causes frustration for his girlfriend Connie. Naturally, Gogo meets Connie and they fall in love. Meanwhile, Aunt Wendy’s shady neighbor and his gang concoct a scheme to part Aunt Wendy from her cash. Also meanwhile, the local motorcycle gang wants revenge on the volleyball players for… getting footprints on their beach. Somehow all the subplots come together at the pajama party.