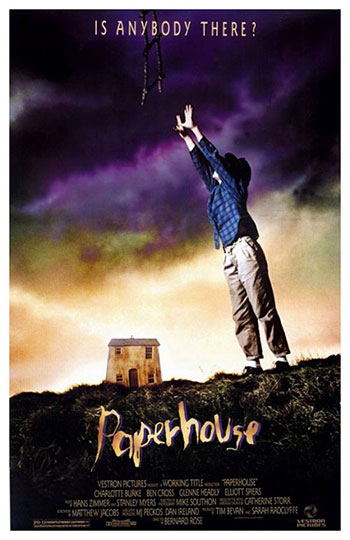 Anna is becoming lost in the loneliness of her own world when she discovers she can visit another, a house she has drawn herself and occupied by a young disabled boy. But as she discovers more of the links between her fantasy world and the mundane present, she is drawn only deeper into a dream turning into a nightmare.

The best horror movie you’ve never heard of. Though calling it a horror may be selling it short. Paperhouse is a profound psychological drama that deftly deals with themes of growing up, regret, sorrow, loss, resentment and leaving childhood innocence behind. Director Bernard Rose made his feature debut with this film and truly gave us something for the ages. Shot in 1988 there is very little that dates Paperhouse and it has the lasting ability to make new impressions upon every new generation.

Liberally adapted from Catherine Storr’s novel “Marianne Dreams” (and not the first live-action adaptation either) the film follows a girl called Anna who falls ill with glandular fever on her 11th birthday. She draws a house on a shred of paper from her exercise book and falls into a dream in which the house exists as a lonely structure on a desolate landscape. Each subsequent dream that she has is altered by the presence of whatever she adds to the picture. In her third dream she meets a boy she thinks she has created called Marc. She befriends him and their relationship becomes stronger as the dreams become darker and scarier.

Charlotte Burke who plays Anna is a terrific actress and it is very strange that, after just one film, she should disappear and never be in anything ever again. She really does give a great performance. Eliott Spiers died in 1994 giving his sorrowful performance as Marc, Anna’s dreamworld friend, a bittersweet edge. But special mention has to be made of Hans Zimmer’s wonderful score. Eerie, mysterious, joyful with a hint of sadness; his score to Paperhouse has it all. It sounds a little bit too close to main melody of Broken Arrow, but when it’s this good who cares? Along with Total Recall, Paperhouse proves that architects of subversive dreamworlds existed in film long before Christopher Nolan made it Inception.