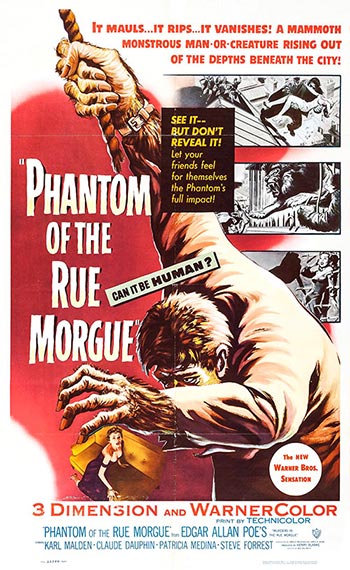 After several women are murdered, the police are baffled who the suspect is. All evidence points to Dupin, but soon it becomes apparent that it is something that is stronger and more deadlier than man.

This version of “Phantom of the Rue Morgue” is far superior to the earlier Bela Lugosi version in virtually every respect! Firstly, the music score by David Buttolph adds a sinister spine tingling note that heightens the element of fright. The cast members, all of them, led by Karl Malden and the underestimated Claude Dauphin as the Inspector, move the plot along and ably hold the audience’s attention as the story unfolds. The mood, the period, the locale of turn-of-the-century Paris are all re-created very well by Director Roy Del Ruth. The garish hues of Warner Color, too, heighten the imagery.