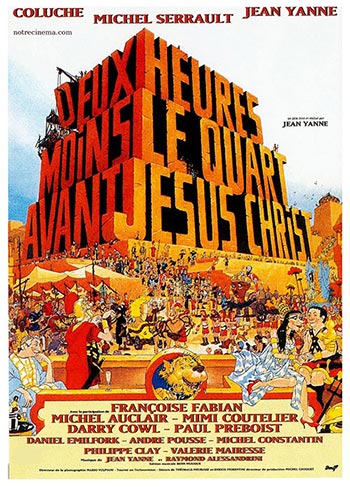 The setting for this story is Rahatlcoum, a Roman colony in North Africa, but the “colonists” watch television, have gay bars, trade unions, and traffic problems — something like the “Flintstones” in an Afro-French incarnation, slipping around on Monty Pythonesque dialogue.

A gay Jules César’s (Michel Sarrault) expensive vacation causes the population to grumble and gripe, they would rather have mechanic Ben Hur Marcel (Coluche) take Jules’ place as their exalted leader. Once she gets out of jail, Cleopatra (Mimi Coutellier) declares that old Ben is actually her long-lost half-brother, and lo and behold, Marcel of the chariot taxis is named the new pharaoh, Aminemphet. French critics loved this film and American critics hated it, leading one to suspect that being French helps considerably in responding to its humor.

Quarter to Two Before Jesus Christ (1983)