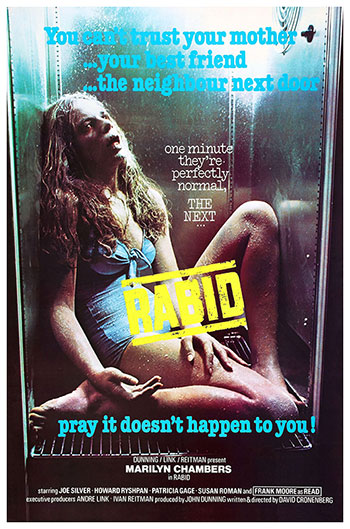 Audio 4: Commentary with William Beard, Author of
‘The Artist as Monster: The Cinema of David Cronenberg’

Rabid (1977) is a strange film about a parasitic virus that inhabit’s the body of a young woman (Marilyn Chambers). She receives this strange mutation after a new experimental procedure is performed upon her after she and her boyfriend were involved in a motorcycle accident. The doctors at a plastic surgery clinic save her life but her body revolts and mutates against the new cellular structure. The staff at the clinic and it’s patients must answer for trying to defy nature.

A very good film from David Cronenberg. He further explores the topic of man fighting mutations from within or trying to change human nature. it’s a topic that he returns to from time to time. He started off from Shivers and continued it in Rabid, The Brood, Scanners and Videodrome. Like most of his earlier films, this one was shot in around around the province of Quebec. Partially funded by the Canadian government, this twisted low budget wonder is a must for cerebral horror fans and Cronenberg devotees. Rabid benefits from the director’s trademark clinical and cold aura.