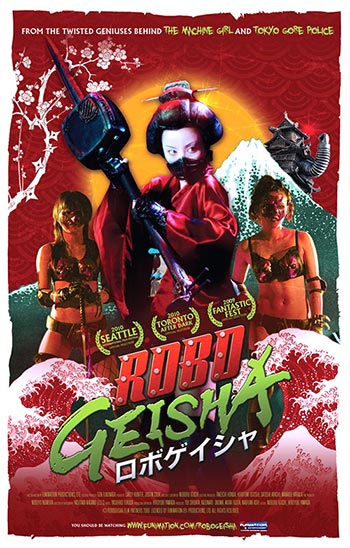 Yoshie (Aya Kiguchi) is a lovely but shy girl who has spent all her life playing second fiddle to her big sister Kikue (Hitomi Hasebe). Kikue has become the most popular hostess at a local geisha house, while Yoshie is stuck doing the cleaning and suffering unflattering comparisons to her sister. Both Yoshie and Kikue fall under the sway of Hikaru Kageno (Saitoh Takumi), heir to a valuable metal foundry who has developed an insane but ingenious secret plan to turn geishas into high-tech robotic assassins in a bid to take over the world.

The sisters leave a bloody trail in their wake as they do Kageno’s bidding, but the long-simmering rivalry between the sisters comes to a boil when Yoshie refuses to kill a handful of senior citizens and turns on her master, as well as her sister who remains loyal to Kageno.

RoboGeisha was directed by Noboru Iguchi, who previously pondered the plight of females turned into robots in 2008’s The Mechanical Girl.