Santo vs. the Killers from Other Worlds (1973) Rubén Galindo 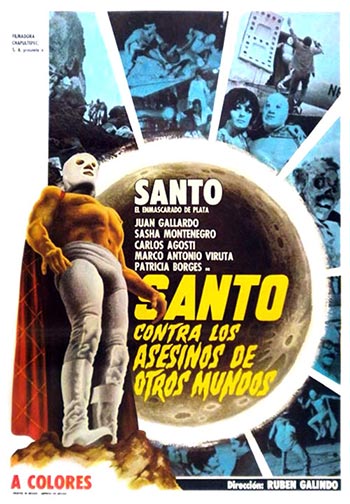 After four people are killed by monstrous creatures, Santo is called in to help by Chief O’Connor. They receive a televised message from Malkosh who threatens further deaths if he is not paid ten million in gold bars. When they vacillate, Malkosh follows through on his promise and others are killed. Santo hides aboard the plane delivering the gold but is captured by Malkosh and forced to fight in an arena. Defeated, Malkosh reveals that the creatures are microscopic alien spores brought back in a Moon rock that have grown into monsters after contact with Earth atmosphere. Santo then contacts Karen, whose father Professor Bernstein has been kidnapped by Boris Licur to try and make the alien organisms more controllable. Together Santo and Karen set out to rescue her father and stop Licur.