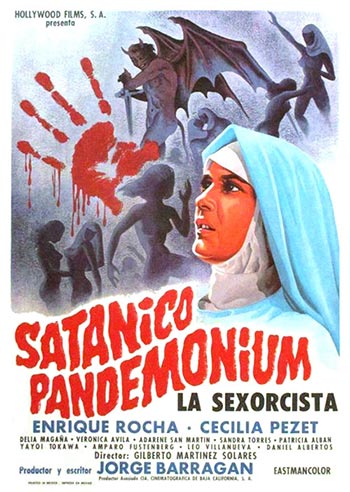 One of the most faithful nuns in her convent, Sister Maria finds herself obsessed by the Devil. Obsessed, not possessed, because Satan is an external force in this film. A strapping and vampiric lad, the Devil brings out Sister Maria’s inner desires for both sex and blood. Plagued also by her devotion to God, she tries to fight these forbidden desires and lusts with prayer and penitence only to have them come back ten fold. Sister Maria is suddenly caught between Satanic submission or death.

Satanico Pandemonium is a good nunsploitation effort in the vein of, the more celebrated, Juan Lopez Moctezuma’a Alucarda. It has sex, nudity, lesbianism, child seduction, self mutilation, blood, and death(not necessarily in that order, of course). The ending is clever and surprising following a bloody and ravenous climax. If you’re a fan of nunsploitation and offbeat cinema, do yourself a favor and check out Satanico Pandemonium. You won’t regret it.