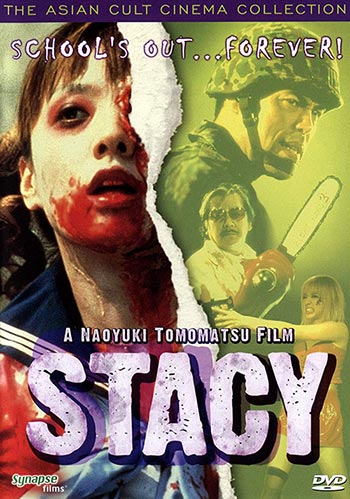 In the early 21st century, teenage girls between the ages of 15 and 17 begin dying all over the world. Shortly before they die, the girls succumb to NDH (Near Death Happiness), a “pre-death” state of absolute bliss and joy.

Once dead, girls come back as a flesh-eating zombie nicknamed “Stacy”. The world is in chaos. Countries suffer from famine, war, and zero-population growth because of this teenage death epidemic. To keep the zombies from returning and eating innocent people, families are urged to kill their daughters before they are allowed to die by this mysterious disease (chopping them up and leaving them in garbage bags for govern-ment-sanctioned pick-up). In a Japanese military base, some undead schoolgirls are held and tested by a scientist who tries to unlock the secrets behind the girls return from the dead. Suddenly, the world turns upside down yet again as a soldier, in a fit of depression, lets the girls free to storm the base and devour anyone in their path.

Based on the popular Japanese novel by Kenji Otsuki, Stacy is a bloodbath of extreme gore effects and comedy with elements of Resident Evil and George A. Romer’s classic Day of the Dead.