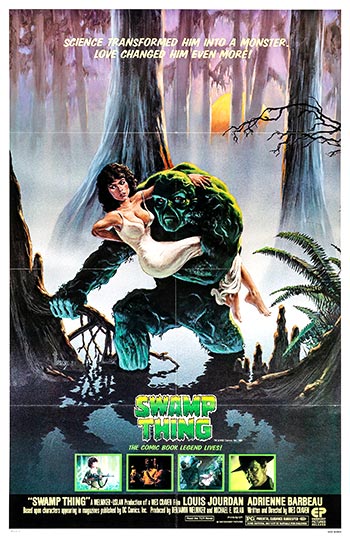 Dr. Alec Holland, hidden away in the depths of a murky swamp, is trying to create a new species – a combination of animal and plant capable of adapting and thriving in the harshest conditions. Unfortunately he becomes subject of his own creation and is transformed . . . Arcane, desperate for the formula attempts to capture the Swamp Thing. An explosive chase ensues that ultimately ends with a confrontation between Holland and a changed Arcane . . .

Visually,this flick is very impressive. The location looks both beautiful and tangled enough to make us believe we are far from civilization. The acting is pretty good and the film is sometimes effective. There are some unintentional laughs, but “Swamp Thing” isn’t a serious horror movie. No strong violence, just nice entertainment plus a little bit of nudity.