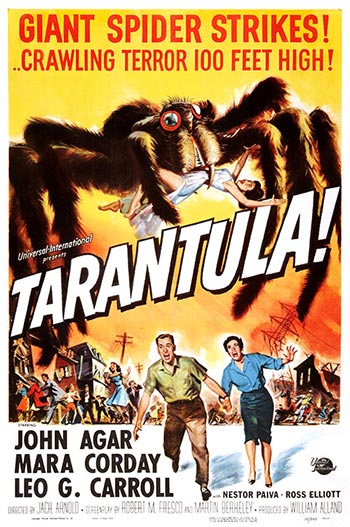 When a tarantula which has been injected with a special nutrient formula escapes from a scientist’s laboratory, it grows into a one hundred-foot beast that menaces the Arizona countryside.

This is a top-of-the-line Sci-Fi thriller from the studio that did ’em best in the 1950s – Universal-International. Produced by William Alland (who also produced “Creature From the Black Lagoon” and “It Came From Outer Space”, and directed by Jack Arnold (who directed those films) it has an intelligent script and good acting all the way around. Arnold does a great job of building suspense as he cleverly keeps the titular monster mostly off-screen for the first 2/3 of the film until it’s simply too big to hide.

And then — watch out, folks! As in many another sci-fi story, the road to hell is paved with good intentions, and if there’s a villain of the piece, it’s the Nuclear Age – the spider of the title is merely doing it’s natural thing: searching for food. Except that, thanks to Leo G. Carroll’s well-meaning experiments (to increase the world’s supply of food), this is one BIG spider with an equally BIG appetite! Universal’s special effects department just about out-did themselves here – the matte work is almost flawless (check out Leo G. Carroll’s house after the spider’s visit), and the make-up department did excellent work as well. This is one of the best of it’s kind, and great fun on a rainy Saturday afternoon.