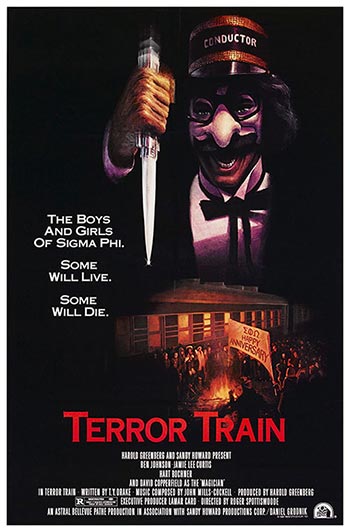 A college fraternaty prank goes bad and student ends up in the mental ward. Four years later, it’s graduation time, and the members of the fraternity decide to have a costume party aboard a train trip to celebrate thier graduation. Unknowingly to them, a killer has slipped aboard, wacking them off one by one, disguised in the costumes of the victims.

Of the slasher films that Jamie Lee Curtis would appear in after the masterful Halloween (1978), Terror Train is truly the best. It’s also one of the better genre entries of the early ’80s.

College students hold a costume party on a train, only to have a masked stranger come aboard with murder on their mind. But is this murderer really a stranger?

As slasher films go, Terror Train really has a lot going for it. The claustrophobic setting is an ideal place for suspense and it works! The direction is compact and nicely done, making great use of the rather creepy-looking masks that the killer wears. This film also boasts one of the most suspenseful chase sequences in the genre! The cinematography is slickly-well done. The music score is unique and beautiful (especially Alana’s theme, heard mostly in the beginning of the end credits).

he cast is also in good form. Jamie Lee is good as her likable heroine self. Handsome Hart Bochner does well as the two-faced frat leader. Veteran actor Ben Johnson is a welcomed addition as the train conductor. Even David Copperfield manages to be a little menacing in his role as a mysterious magician.

All together Terror Train does well, making for a good slasher-thriller with a few tricks up its sleeves. Definitely a highlight among 80’s slasher films.