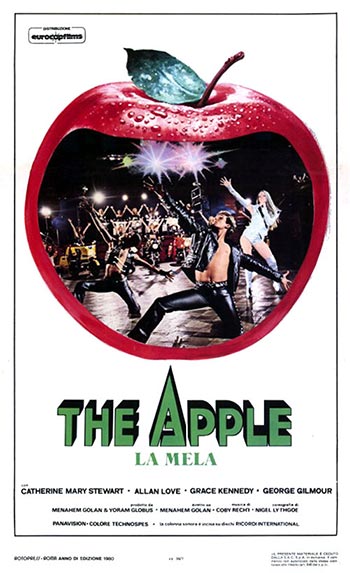 Musical set in the ‘future’, e.g. 1994. A young couple enters the world of the music industry, but also the world of drugs.

Alphie and Bibi, two sweet, naive youths from Moose Jaw, Canada, have come to America to compete in the 1994 Worldvision Song Festival. Although the pair have talent, they are beaten out by the underhanded tactics of the festival favorites, another duo with the backing of BIM: Boogalow International Music, and its leader, Mr. Boogalow. Though crestfallen by their loss, Bibi and Alphie are soon delighted to hear the Mr. Boogalow has taken an interest in their music and wants to sign them to his label. All is looking up for the two until they begin to discover the dark underside of the rock and roll world.

THE APPLE made in 1979 is the monstrously mashed together mix of TOMMY and ROCKY HORROR and PHANTOM OF THE PARADISE and LOGANS RUN and FARENHEIT 451 and HAIR…with CANT STOP THE MUSIC campiness, the XANADU dancers, and ZIGGY STARDUST eyeshadow, frosted wavy hair and lyrics poached from the first 8 bars of quite a few Beatles songs as ‘new’ songs (as another comment noted: ended up sounding like jingles from deodorant commercials) THE APPLE is a film you must see, the make everyone you know see while you watch their reactions. It is more fantastic to own than ELECTRIC BOOGALOO or LAMBADA or SALSA put together! THE APPLE is more berserk than all those film mentioned above, ground into fluorescent dust-chalk and blended with glitter and then swallowed. Made in an unfinished shopping mall in East Germany by mad Israeli mogul Mehaheim Golan from the famed Cannon Films shed, THE APPLE is c colossal collision of Eurovision and a projectile vomit.