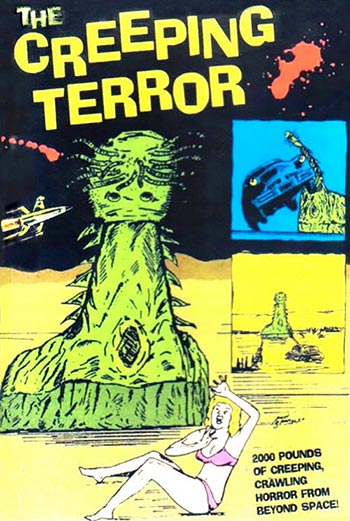 A creature that looks like a cross between a Chinese dragon puppet and the Pope sucks up people into its maw. A sheriff, his wife, and a “handsome” scientist battle it to the end, with a sub plot about the evils of bachelorhood.

You think “Plan Nine” was bad? At least Ed Wood had sync sound, and shot the film with the right exposure. This wacky little gem from 1964 is my vote for the worst film ever. A monster (made up of a moldy carpet flung over crawling kids, who are plainly visible) attacks locals in Nevada. Director Art J. Nelson (Who resembles a spaced out Tarantino, and plays the film’s hero.) reportingly lost the dialog track to the film, but replaced missing talk with a narrator for driver safety films. Highlights include the carpet guy attacking a high school dance (Monster makes sure he doesn’t wreck tables and chairs) the army is called out in one scene (This “army” consists of five guys in helmets being transported in a pick-up truck!) 80 minutes of mindless fun.