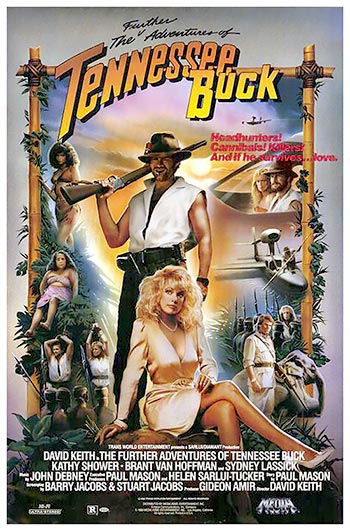 A drunken, down-on-his-luck adventurer is hired by a wealthy man and his beautiful wife to take them on a hunting expedition in the jungle. After a while, though, the guide begins to suspect that there’s more to the expedition than just hunting.

David Keith both directs and stars in this Sri Lanka-filmed adventure spoof. Taking equal portions of “Indiana Jones,” King Solomon’s Mines and The Macomber Affair, the film finds Keith playing Buck Malone, a mercenary hunter, headquartered in Borneo. Hired to guide a cotton-witted married couple through the wilderness, Malone falls in love with the wife (former Playboy foldout Kathy Shower) while hubby (Brant van Hoffman) walks around in a perpetual daze. The film ventures into John & Bo Derek territory when the intrepid trio cross the path of erotically-inclined cannibals.

The Further Adventures of Tennessee Buck (1988)