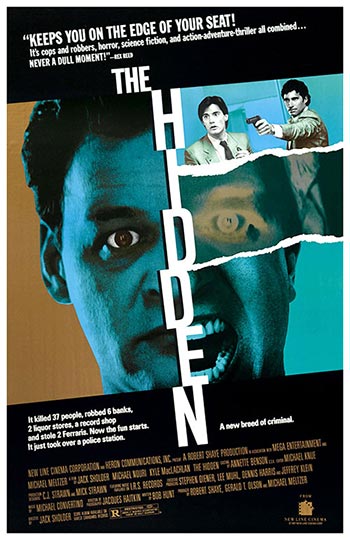 An alien is on the run in America. To get his kicks, it kills anything that gets in its way, and uses the body as a new hiding place. This alien has a goal in life; power. Hotly pursued by another alien (who’s borrowed the body of a dead FBI agent), lots of innocent people die in the chase.

In the 1987 sci-fi actioner “The Hidden”, an evil, body-switching alien with a taste for Ferraris, loud music, and murder is wreaking havoc. Only another alien, impersonating an FBI agent and teamed with an ordinary cop, knows how to stop it.

“The Hidden” is an irrepressible, high-spirited genre flick full of screeching car chases, sprays of bullets, and shattering glass that leaves more than a few casualties in its wake. It has alot of fun with the body-switching premise and maintains a strong sense of humor throughout. Kyle MacLachlan’s performance as the unearthly FBI agent offers another great reason to watch. This is the perfect film for those in search of a rock ’em, sock ’em good time.