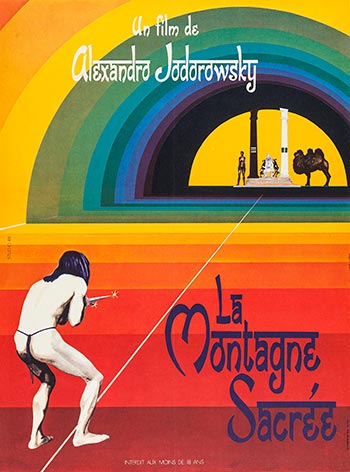 A Christlike figure wanders through bizarre, grotesque scenarios filled with religious and sacrilegious imagery. He meets a mystical guide who introduces him to seven wealthy and powerful individuals, each representing a planet in the solar system. These seven, along with the protagonist, the guide and the guide’s assistant, divest themselves of their worldly goods and form a group of nine who will seek out the Holy Mountain, in order to displace the gods who live there and become immortal.

The scandal of the 1973 Cannes Film Festival, writer/director Alejandro Jodorowsky’s flood of sacrilegious imagery and existential symbolism is a spiritual quest for enlightenment pitting illusion against truth.