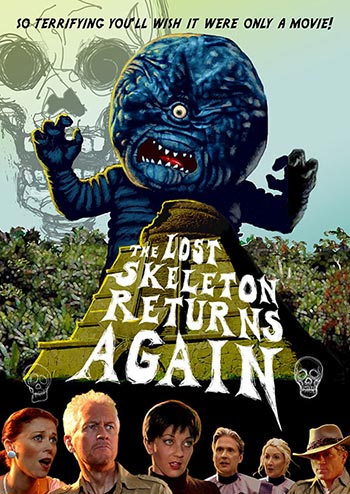 Jerranium 90. A little rock that made all the papers. Only what didn not make the papers is that the main source of this newly discovered element is buried deep within the Amazon. And everybody wants it, including crooked importer Handscomb Draile, slimy Gondreau Slykes, cheap crook Carl Traeger and evil scientist Dr. Ellamy Royne. So when Reet Pappin is sent on a mission, vital to national security, to find Dr. Paul Armstrong, now a bitter alcoholic disenchanted with science, he may have his work cut out for him! Especially when joined by Armstrongs loyal wife Betty and the mind control susceptible twin brother of Dr. Roger Fleming, who is carrying a familiar sinister skull belonging to none other than the Lost Skeleton of Cadavra himself!

As the parties converge in the dreaded Valley of the Monsters, other familiar faces begin to pop up, as well as a variety of monsters and an ancient race known as the Cantaloupe People, led by their haughty queen, Chinfa. Who will get what they want? And who will not get it?